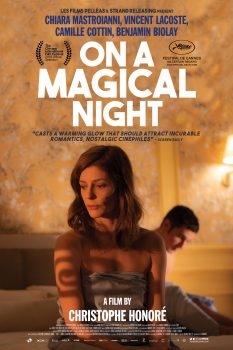 ON A MAGICAL NIGHT

Chiara Mastrioanni won the Best Actress Award at this year’s Cannes Film Festival for her delicious star turn in Christophe Honoré’s quirky, song-laden, fantasy-drenched romantic farce, ON A MAGICAL NIGHT (Think A Midsummer Night’s Dream meets Scenes From a Marriage.) Mastrioanni is surrounded by a delightful cast of somewhat unexpected characters, beautifully brought to life by the likes of Camille Cottin (“CALL MY AGENT”), Vincent Lacoste, and a wonderfully wise Carole Bouquet. The plot is triggered by a sudden marital crisis (and quite a bit of genre-appropriate bed-hopping), and takes place over the course of one life-changing night in Paris. Yet, under its frothy surface, the film is actually a kind of deconstructed love story, in which the dreams of youth are held in sharp contrast to the world-weariness of middle age. But maybe the key to happiness lies somewhere in between… As Barry Manilow ponders, “Could this be the magic, at last?” 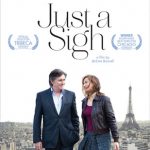 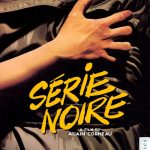